Learn everything about the Cuckoo Wasp.

Cuckoo wasp, also called Ruby-tailed Wasp, any member of the insect family Chrysididae (Chrysalidae) of the order Hymenoptera. The family is large, common, and widely distributed. More than 1,000 species of the genus Chrysis alone have been described. Most cuckoo wasps are small, seldom exceeding 1.2 cm (about 0.5 inch) in length. The colour is usually metallic green or blue. The flexible abdomen allows the insect to curl into a ball when disturbed or attacked. 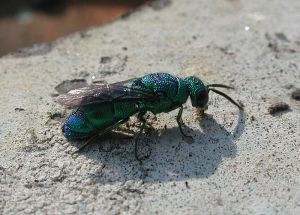 All cuckoo wasps are solitary (nonsocial), external parasites, mostly of full-grown bee or wasp larvae. Species of the genus Cleptes are parasitic on sawfly larvae; those of Mesitiopterus are parasitic on the eggs of the walkingstick.

The cuckoo wasps are so called because some species lay eggs in the nests of other solitary wasps and bees in a manner analogous to some cuckoos (bird order Cuculiformes), which lay eggs in the nests of other birds. The cuckoo wasp female places her egg in the unfinished and untended nest of another wasp or bee. The nest is later sealed by the owner after she has placed her own egg there along with food for her future larva. The cuckoo wasp larva either eats the other larva or starves it to death by devouring all the food.