Learn everything about Bumblebees.

Bumblebee, (tribe Bombini), also spelled bumble bee, also called humble-bee, common name for any member of the insect tribe Bombini (family Apidae, order Hymenoptera). These bees occur over much of the world but are most common in temperate climates. They are absent from most of Africa and the lowlands of India and have been introduced to Australia and New Zealand to aid in the pollination of various flowering plants. Most authorities recognize two genera: Bombus, the nest-building bumblebees, and Psithyrus, the parasitic bumblebees. Certain species are sometimes assigned to a third genus, Bombias. About 19 species of Bombus and 6 species of Psithyrus occur in Great Britain. About 50 species of Bombus, as well as some Psithyrus species, are found in North America. 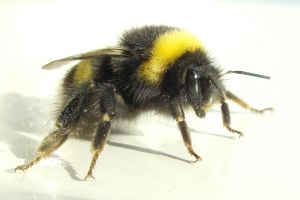 Bumblebees are robust and hairy, average about 1.5 to 2.5 cm (about 0.6 to 1 inch) in length, and are usually black with broad yellow or orange bands. They often nest in the ground, commonly in deserted bird or mouse nests. Bombus species are social bees; i.e., they live in organized groups. Each nest has a queen, drones (males), and workers. Psithyrus species, having no worker caste, enter Bombus nests to lay their eggs, which are then cared for by Bombus workers. The resemblance between a Psithyrus species and the Bombus species it parasitizes is often remarkable. The British species P. vestalis sometimes stings the Bombus queen to death. There are then no Bombus larvae produced to compete with the parasitic Psithyrus larvae for the attention of the workers.

The Bombus queen lays her eggs in the nest after spending the winter in hibernation. The first brood generally develops into four to eight worker bees. Shortly after emerging as adults these workers take over from the queen the duties of collecting pollen and caring for the hive. The queen then retires to a life of egg laying. For a while only worker progeny are produced, and the colony grows until it contains 50 to 600 bees. In late summer, with the large population of workers bringing in abundant food, males and new queens are produced. Although some males develop from unfertilized eggs laid by the queen, most hatch from eggs laid by workers. In early fall the queen stops laying eggs, and the colony, including the queen, gradually dies out. During this period the larvae of certain moths and beetles prey on the remaining eggs and larvae in the nest.

The next season’s queens have developed from eggs laid late in the season. The future queens, when fully grown, leave the nest, mate, and find a sheltered place in which to hibernate for the winter. The lone queens then start new nests in the following spring.